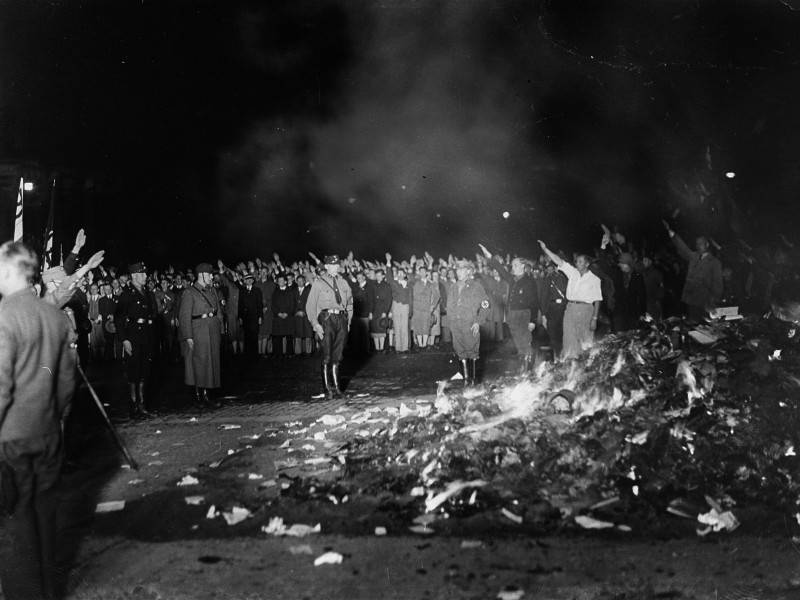 On Thursday, Aug. 15, 2013, Anythink will host an opening reception for “Fighting the Fires of Hate: America and the Nazi Book Burnings” from 6-8:30 pm at Anythink Wright Farms in Thornton, Colo. Community members and media are invited to join Anythink for this special open house and guest presentation by Holocaust survivor Walter Plywaski.

Guests can explore the interactive exhibition produced by the United States Holocaust Memorial Museum in Washington, D.C. A comprehensive examination of the Nazi book burnings, this exhibition features free-standing graphic panels with reproductions of photographs, newspapers, posters, documents and books, as well as audio-visual components with historic film footage. “Fighting the Fires of Hate” invites participants to learn about these historic events and how they continue to resonate in American politics, literature and popular culture. Anythink will host several interactive programs on the topic of censorship to coincide with the exhibition, which will be on display Aug. 9-Sept. 28, 2013.

As part of the opening reception, Holocaust survivor Walter Plywaski will share his story and participate in a Q&A session with attendees from 7-8 pm. After living in the ghetto of Lodz, Poland, Mr. Plywaski was forced into both the Auschwitz and Dachau Nazi concentration camps. His tale of survival encourages attendees to confront prejudice and examine the causes of such horrific events.

“It is an honor for Anythink to be able to host Mr. Plywaski at the opening reception,” says Anythink Director Pam Sandlian Smith. “Providing opportunities to understand our past is just one key role of libraries. We hope our community will participate in this important conversation.”