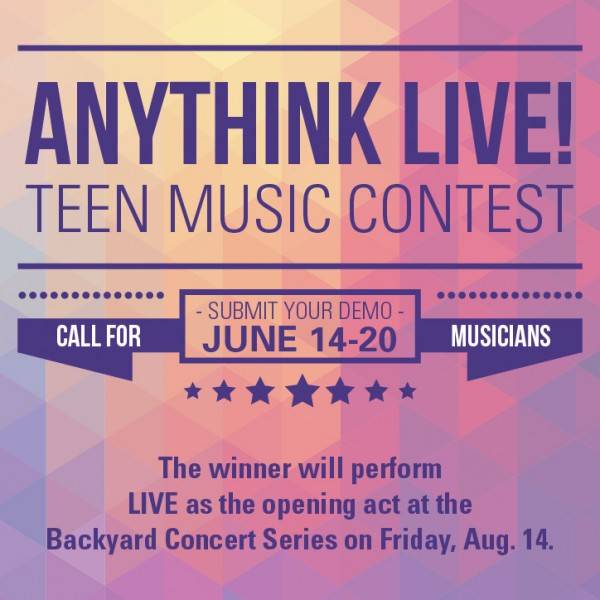 To celebrate the creativity and talent of its customers, Anythink is hosting Anythink LIVE!, a district-wide music contest for teens. From June 14-20, area teens in grades 6-12 are invited to submit a demo of their original music to Anythink. A panel of judges will narrow the selection, and the top acts will be put to popular vote via Anythink’s Facebook, Twitter and Instagram accounts. The winner of Anythink LIVE! will perform as the opening act for Dixie Leadfoot & The Chrome Struts at the Backyard Concert Series on Friday, Aug. 14. All musical genres and styles, including full bands or solo artists, will be considered. Demos should be submitted via SoundCloud or YouTube to wfteens@anythinklibraries.org by Saturday, June 20.

“Anythink LIVE! is a great opportunity for teens to share their talent,” says Kristen Thorp, teen guide at Anythink Wright Farms. “It’s a way to come out of the recording studio and showcase their creativity with the community.”

Teens are encouraged to record their music at The Studio at Anythink Wright Farms, a digital learning lab where students are partnered with community members for workshops that emphasize creativity. In addition to innovative programming, teens also have free access to the tools needed to fuels their passions, including a complete audio recording studio with a MIDI keyboard, microphones, instrument connections and Garage Band. The Studio, which also describes Anythink’s overall approach to hands-on, participatory programming, is a regular hub for the district’s teen musicians. Funds raised from this summer’s Backyard Concert Series will support the Anythink Foundation and the expansion of The Studio.