A night owl takes on Denver 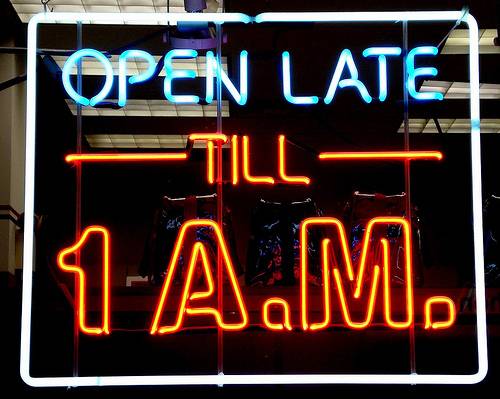 Whenever I visit New York, I’m always struck with starry-eyed wonder around 10 pm at night. As a local Denver native, I’m used to being in bed around 10 pm, snuggled up with a comforter and a good book. That’s not the case in New York  –10 pm in New York is when this bustling city wakes. As Broadway shows close and throngs of people are pushed out into the street, the city comes alive with residents and tourists alike seeking food and entertainment. The air practically buzzes with life.

While Denver has a long way to go in our night life offerings, that doesn’t mean late-night magic isn’t anywhere to be found. Late-night eateries are surging in popularity as our Mile High City grows, and unique entertainment venues seem to be popping up everywhere. So what’s a night owl in Denver to do? Sleep is out of the question, so Anythink is here to help with a suggested late-night itinerary.

Well, to start out, head to Izakaya Ronin in growing RiNO district. This Japanese speakeasy and underground eatery is open until midnight during the week and 1am on weekends. Not far from there, J Street Kitchen serves up classic American dishes like green chili mac and cheese and shrimp and grits until 1 am. A staple of Denver lore, the Cherry Cricket Ballpark is the perfect place to head after extra innings at Coors Field, where you can grab one of its famed jalapeño cream cheese burgers up until 1am.

If your party is seeking more upscale places to rest those weary, heeled feet, try Euclid Hall’s famous poutine and potato pancakes and lush cocktails – or, on the other hand – if you are a starving college student, make sure to head to Jerusalem Restaurant off Evans, for their infamous falafel and hummus.

For late-night entertainment to pair with those amazing eats, try a Pedal Hopper Tour, where you bike, drink and bar hop! Their most popular route includes the Ballpark, RiNo and Lower Downtown neighborhoods, which are the centers for Denver nightlife. For a more challenging nighttime adventure, try Escapology Escape Rooms and their in-house restaurant Solutions. Their escape rooms (including the new Seven Deadly Sins and Mansion Murder) run until midnight on the weekends, and the cheese curds at their Steampunk-inspired restaurant are to die for. If you are looking for laughs, head down to the Voodoo Comedy Club in Five Points for cutting-edge comedy – the Improv Duel is especially great.

To prepare for your late-night outing, I recommend pairing with these reads, available at your local Anythink: