Curbside service will be closed at all Anythink locations on Saturday, July 11, as the library launches its new online catalog. The catalog will also be down beginning at 5 pm on Friday, July 10 until the morning of Monday, July 13.

Curbside services are now available at all Anythink locations as we work toward reopening our buildings to the public on Monday, July 20. The latest updates about these services and reopening plans can be found at anythinklibraries.org/community-safety-notice. 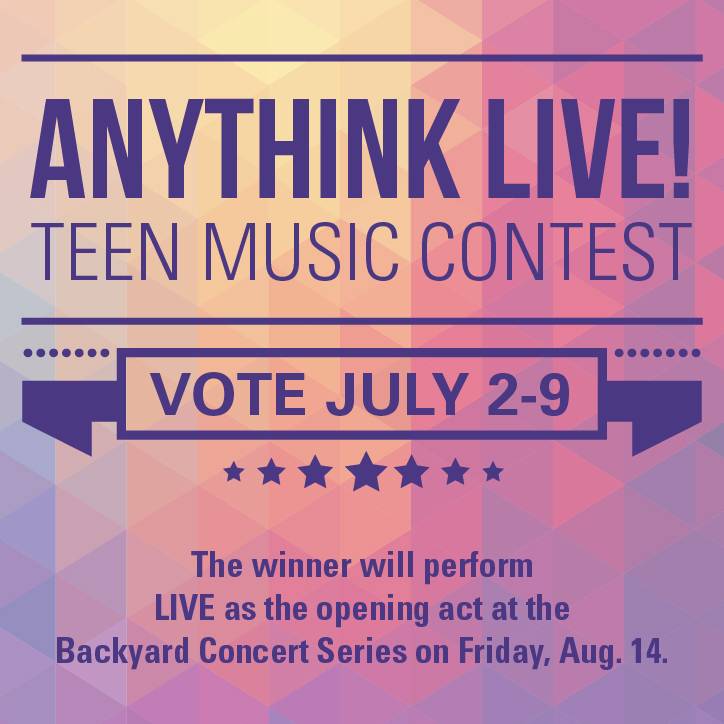 UPDATE: Voting for Anythink LIVE! is now closed. Thanks to everyone who voted!

From solo folk artists to punk rock bands, we received a multitude of entries for Anythink LIVE!, a district-wide music contest just for teens. We’ve sorted through all of the submissions, and our panel of judges has narrowed the entries down to the following finalists:

Now it’s up to all Anythinkers to decide on the winner. Give these finalists a listen and vote for your favorite in our poll below. The winner will perform live as the opening act at Anythink’s Backyard Concert Series with Dixie Leadfoot & The Chrome Struts on Friday, Aug. 14.

Voting for Anythink LIVE! is open from July 2-9. We’ll announce the winner on Friday, July 10 at the upcoming Backyard Concert Series with Calder’s Revolvers. Join us on the one-acre park for the announcement, not to mention BBQ, drinks and great music. The Backyard Concert Series is free and open to the public, with food and beverage sales benefitting the Anythink Foundation and the expansion of The Studio.

A big thank you to all of the teens who entered Anythink LIVE! – there’s no shortage of talent in our community. If you’re interested in learning more about music recording, we encourage you to visit The Studio at Anythink Wright Farms, a digital learning lab where students are partnered with community members for workshops that emphasize creativity. In addition to innovative programming, teens also have free access to the tools needed to fuel their passions, including a complete audio recording studio with a MIDI keyboard, microphones, instrument connections and Garage Band.