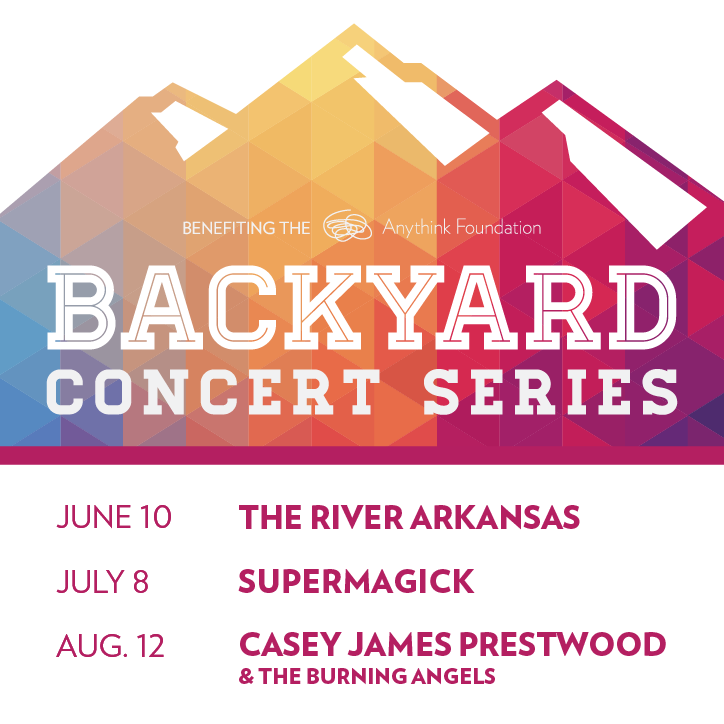 Anythink’s annual Backyard Concert Series returns for its fourth season to celebrate food, music and fun. Held in the one-acre park adjacent to Anythink Wright Farms in Thornton, Colo., from 6:30-8:30 pm, the Backyard Concert Series is an opportunity for community members of all ages to enjoy live music in a picnic-style setting. This year’s lineup includes:

For the second year in a row, Anythink hosts Anythink LIVE!, a teen music contest that celebrates the creativity and talent of Anythink’s teenage customers. Currently underway, the winner of Anythink LIVE! will perform as opening act for Casey James Prestwood and the Burning Angels on Aug. 12 at 6 pm. Last year, five-piece rock band Altitude won the popular vote for Anythink LIVE! They have since released a full-length album and continue to perform in the area.

Local food and drink offerings will be available at a minimal cost, including custom BBQ dinners from Dickey’s Barbecue Pit of Westminster, Colo. Vegetarian options will also be available. This year, beer is provided by Great Divide Brewing. At the June 10 concert, attendees will be able to vote on a variety of literary-themed brews named by Anythink staff. The winning beer will be brewed throughout the summer and tapped for the first time at the Aug. 12 concert.

In anticipation of this literary-inspired Anythink brew, community members ages 21 and older are invited to attend Beerology, a special 2-hour event with Great Divide brewery manager Ro Guenzel on June 2 at Anythink Wright Farms. Tickets to this event are $10 in advance; $15 at the door.

Proceeds from the Backyard Concert Series, including funds raised from food and beverage sales, will benefit the Anythink Foundation and expansion of The Studio. The Studio includes Anythink’s creation labs and the library’s overall approach to hands-on, participatory programming. In the Studio, customers have access to staff and community experts who empower them to develop skills relevant to their lives and interests.

The River Arkansas: The River Arkansas is made up of active musicians from across the Front Range, including Mike Clark (The Haunted Windchimes, The Sugar Sounds, The Ghost of Michael Clark). Named after the river Clark resides by, their style draws on elements of rock and roll, Americana, soul and gypsy folk.

SuperMagick: Funk. Soul. Disco. Flashes of city streets, Rocky Mountain peaks, a distant bayou. SuperMagick (formerly Filthy Children) draws on all of these elements to bring you a dance party like no other.

Casey James Prestwood and the Burning Angels: Drenched in the honest twang that made Gram Parsons and Hank Williams household names, Casey James Prestwood’s carefree vocals and careful guitar feel more like country than a worn-in pair of cowboy boots.