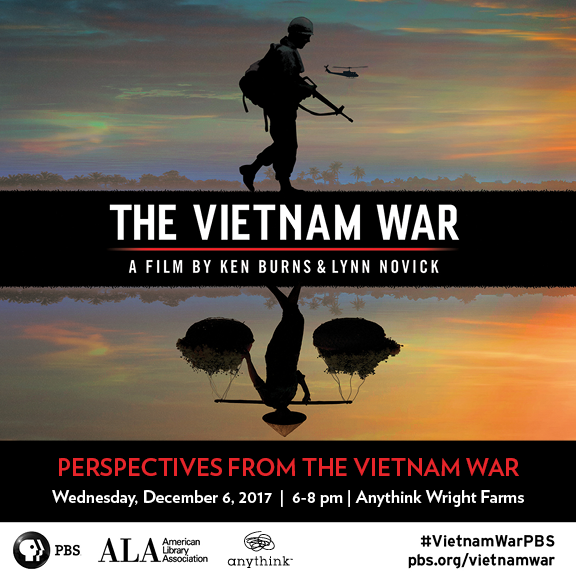 On Wednesday, Dec. 6, Anythink will host “Perspectives from the Vietnam War,” a special panel and Q&A session aimed at creating a community dialogue about this important and controversial historic event. The panel, moderated by Laura Frank, president and general manager of news at Rocky Mountain PBS, features Pulitzer Prize-winning photojournalist Neal Ulevich, Vietnam War veteran Alan Jaffe and professor of history and Asian studies Dr. Xiangsheng Tian. This panel is supported by an award from the American Library Association (ALA), the Public Broadcasting Service (PBS) and Washington D.C.’s WETA public television in conjunction with the recently released Ken Burns and Lynn Novick documentary series, “The Vietnam War.” Anythink was one of 50 libraries in the United States, and the only library in Colorado, selected for this opportunity.

“Participating in the ALA and Ken Burns Vietnam War project is an honor and an opportunity to reflect and remember the impact of this war,” says Anythink Director Pam Sandlian Smith. “We are grateful to include local experts who can guide this critical conversation with our community.”

Clips from “The Vietnam War” series, which features photographs taken by panelist Neal Ulevich, will be shown during the event to help guide the discussion. Topics discussed will include everything from divisiveness about the Vietnam War to the reception of returning U.S. soldiers and the role of the media in public perception. “Perspectives from the Vietnam War” is free and open to the public, though some content may not be suitable for younger audiences.

Get reminders and invite friends by joining the "Perspectives from the Vietnam War" event on Facebook.