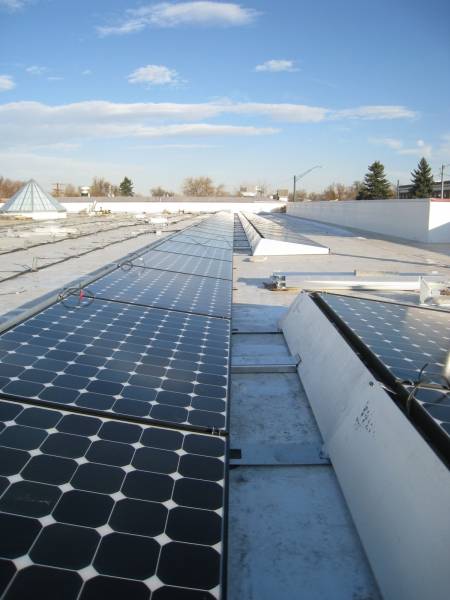 AnythinkTM continues to set the standard for future libraries with its innovative approaches to customer service, programs and corporate culture. Now the library system and its partners have broken new boundaries as Anythink Brighton becomes the first carbon-positive library in the U.S. The combination of the library’s 108kW photovoltaic system, geothermal heating and cooling, sustainable building features, the purchase of carbon credits and the collaborative spirit of the project, Anythink Brighton is now giving energy back to the grid. Total energy savings for the district will be upwards of $30,000 per year.

“From the beginning of our capital projects, the library trustees set the standard to incorporate LEED into our buildings,” says Rangeview Library District director Pam Sandlian Smith. “At every step, we have made our decisions based upon long-term sustainability. While the short-term costs may be higher, over the lifespan of the library, we are much more energy efficient and giving our community a higher return on their investment. Our goal is to eventually be carbon neutral at all of our libraries.”

Humphries Poli Architects P.C. and Fransen Pittman General Contractors, both involved with Rangeview Library District’s capital construction projects, were integral in making the Anythink Brighton building carbon positive, which means the building is offsetting 16 percent more carbon than it is using. Dennis Humphries and his firm incorporated energy-efficient features like the ground source heating and cooling, day lighting strategies and use of recycled materials in the building to lower its impact on the environment. Fransen Pittman General Contractors made a gift of carbon credits to the district, which contributed to the building’s positivity.

“We are thrilled that our role in a truly collaborative design and construction process has resulted in the citizens of Brighton being the recipients of a gift of such significance.  We are hopeful the design of the Brighton library has created a new legacy for the entire community to be proud of for many, many reasons beyond just being a wonderful place to get books and knowledge,” says Dennis Humphries, principal, Humphries Poli Architects.

One of the largest contributors to making Anythink Brighton the first carbon-positive library in the country came about from a grant provided by the Colorado Department of Local Affairs. In 2008, Rangeview Library District was awarded a matching $300,000 grant from DOLA for a photovoltaic system. This funding was sought by Sandlian Smith and owner’s representative Justin Sager of Wember, Inc. Rangeview matched the funds and entered into an agreement with the agency in March 2009 to put the 108kW system in place. The Colorado Governor’s Office of Energy was integral in advising and supporting the district in its pursuit of funding for this project.

“We are glad to assist an organization that helps people in so many ways including improving the climate in which they live. This is a wonderful example of such a project by improving the lives of users of the facilities as well as strengthening the downtown area of Brighton and its environment,” says Don Sandoval, DOLA regional manager.

Ambient Energy, energy consultant to Humphries Poli, calculated that the library will operate without emitting pollutants because of the renewable energy and carbon credits. Additionally, the project will offset the emission of an additional 167,620 lbs of CO2 created by other buildings within the community.  This is because the library is producing more renewable energy than it will use. Two years’ worth of carbon credits were purchased by Fransen Pittman, making the building carbon positive until 2012.

Rangeview Library District has committed to reducing the carbon footprint of all its facilities with the hopes of making all Anythink libraries carbon neutral.

That is really something, I love it. First Anythink becomes the first library to ditch the Dewey Decimal system, and now it's eco-friendly? This is why Anythink can do Anything. It's simply amazing.
This is great! Now if they could print up some maps on where to find things in the library it might make the experience there more positive.
The PV array is well placed, however; won't the skirting used as a wind break arround the sub-array strings act as an insulator restricting cooling air flow and raising the panel temp lowering the overall voltage of the system and shorten the life of the array? For my RE clients I maintain for every $1 in energy efficient lighting of conservative measures taken, you will save $10 in renewables... What energy REDUCING fixtures are empolyed in the building design?