The whimsical world of Hildafolk

Submitted by Jeffrey Schwartz on Mar 18 2017 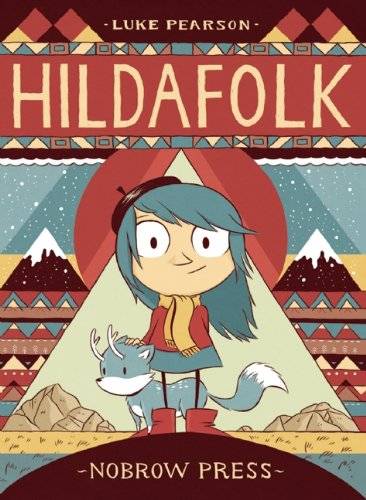 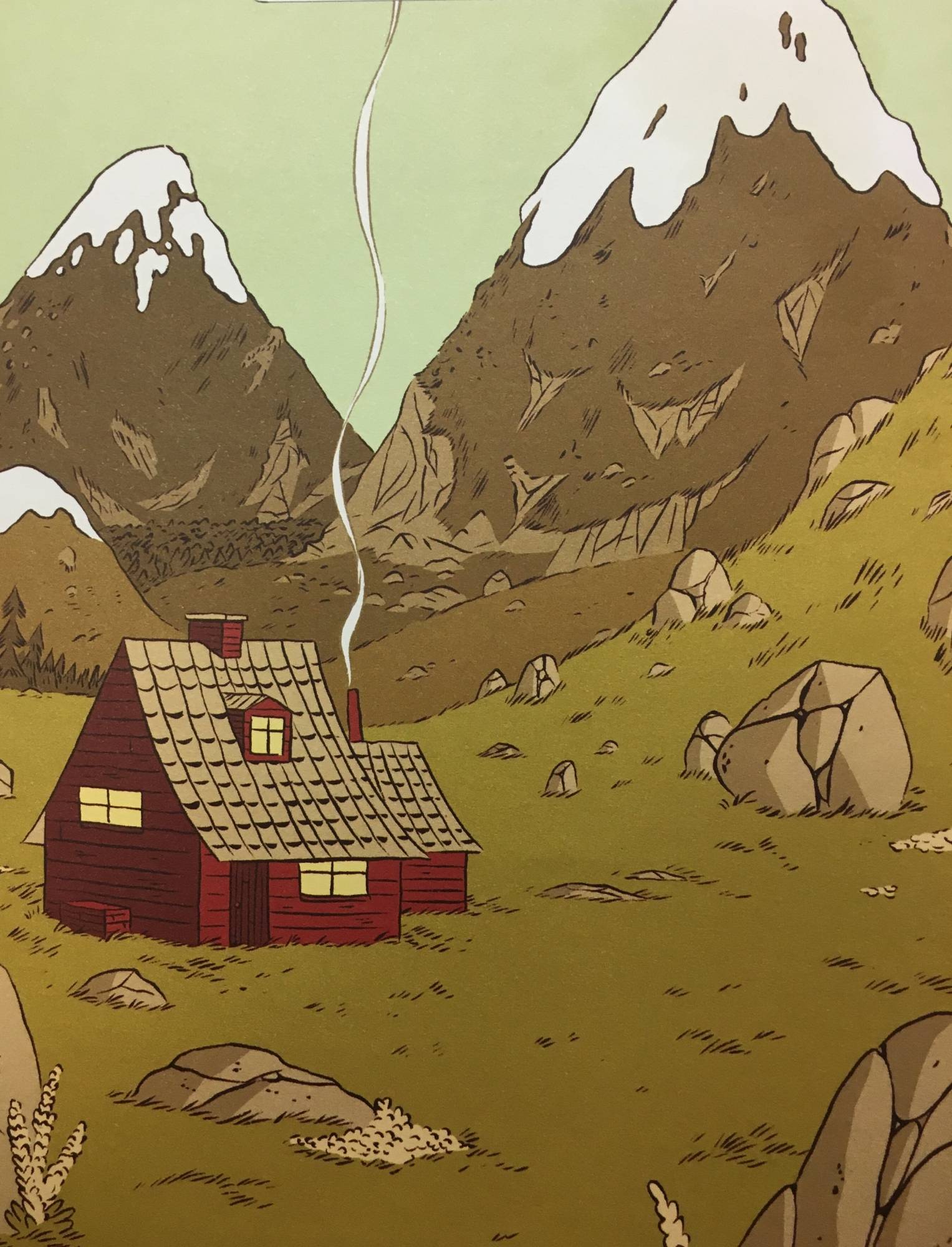 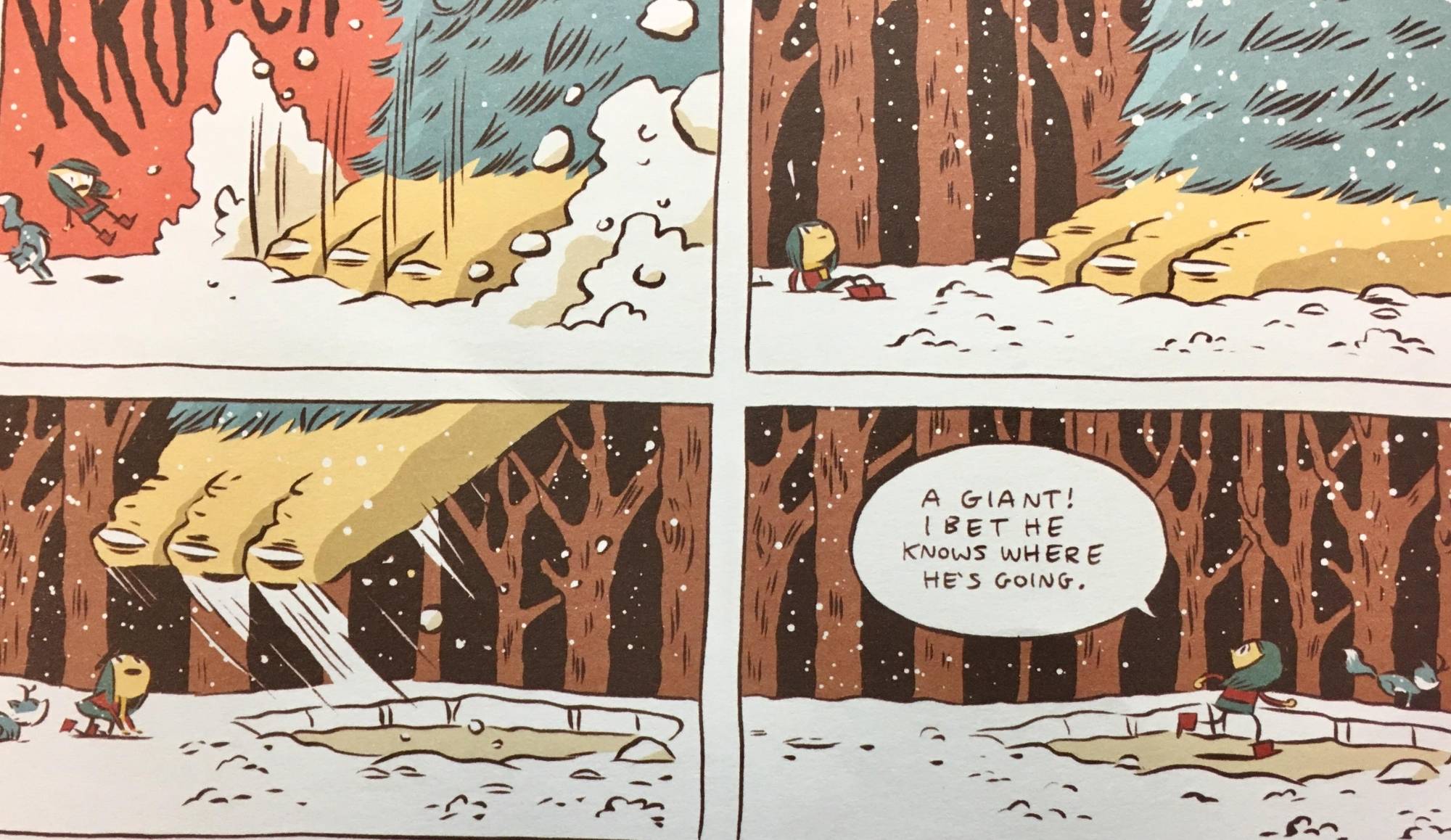 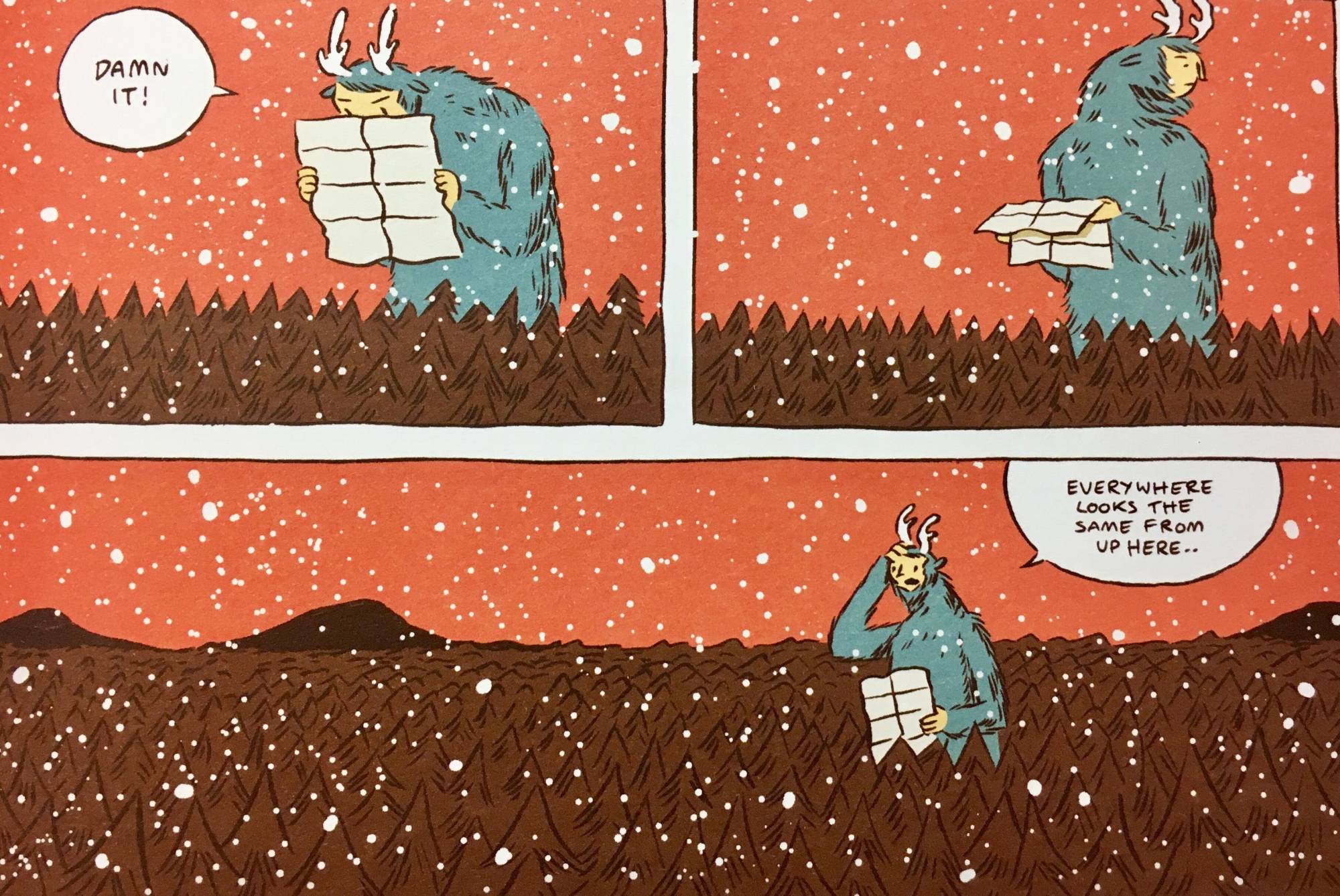 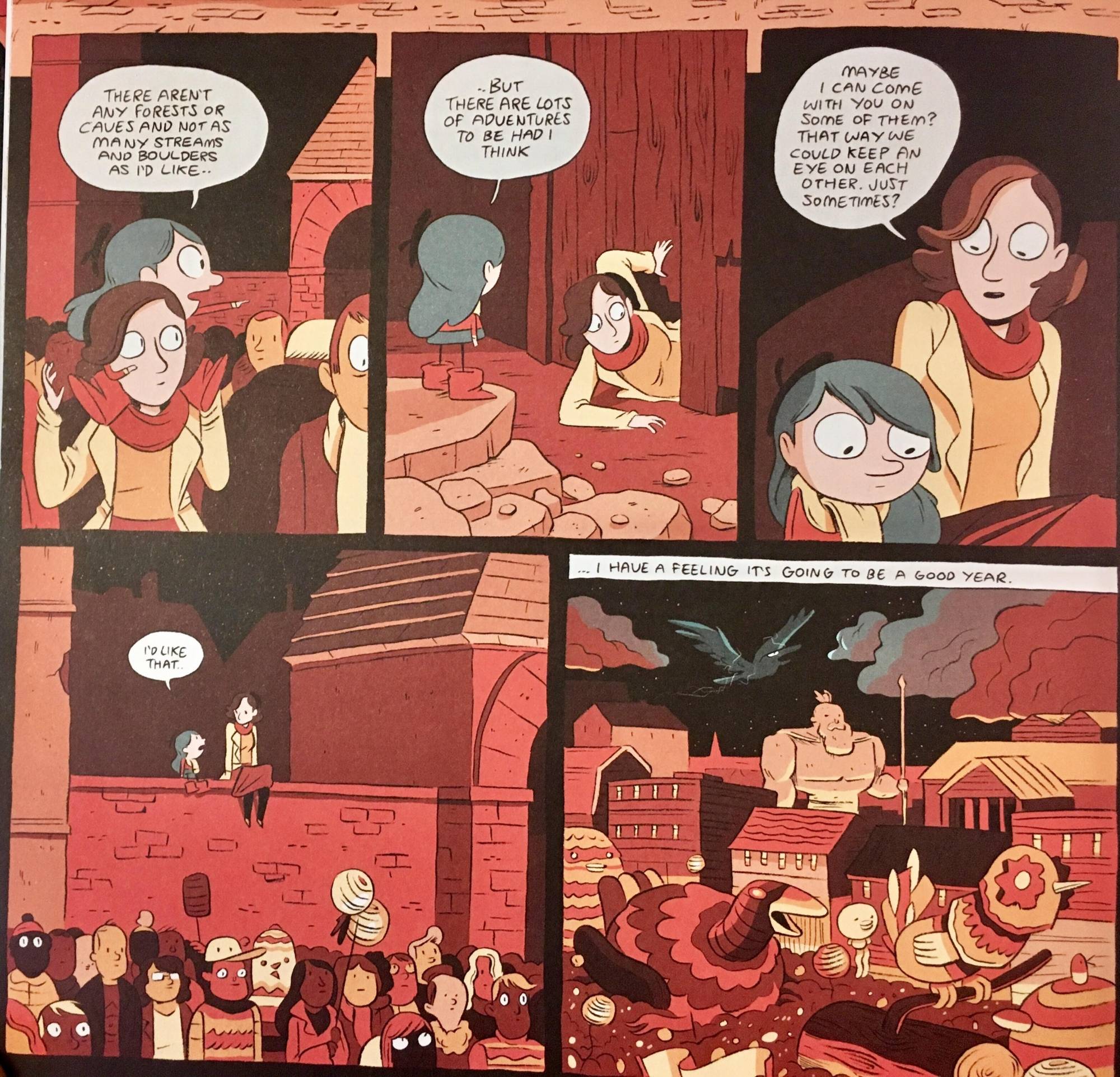 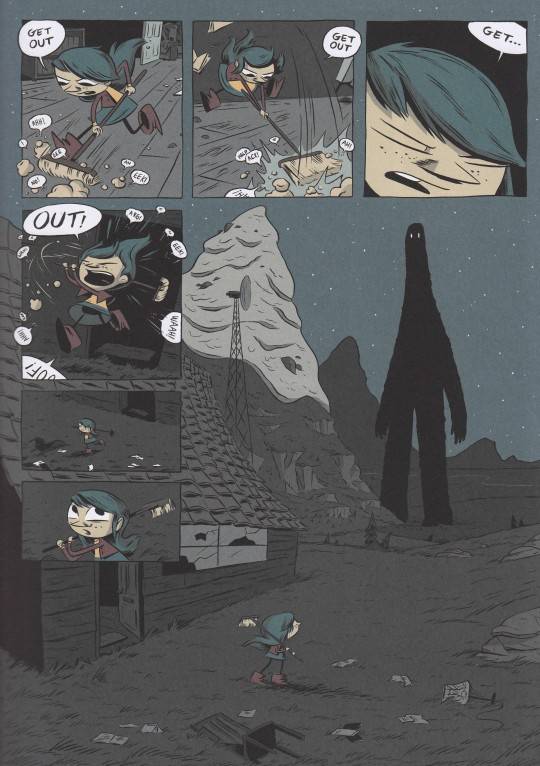 Some books are so good you want to share them with the world. Not every good book elicits this reaction, though. Some books we want to keep for ourselves; they’re too weird or personal for us to press into the hands of friends, family and strangers. But every once in a while – if you’re lucky – you’ll happen upon a book that engages your heart and your brain, that uplifts without resorting to manipulation, a book that seems to be for everyone and yet is also just for you. In my case, this book is actually five books: the all-ages series of graphic novels called Hildafolk by Luke Pearson.

Hildafolk immediately distinguishes itself on page one. The first image is of a house, nestled among fields at the base of snow-capped mountains. A wisp of white smoke from the chimney curls into a pale green sky. Everything feels cozy, lived-in.

On the next page, we’re taken inside and meet Hilda. She’s about 10 or so, and she’s reading a book called Trolls and Other Dangerous Creatures. When she sees clouds gathering at the spire of a mountain, she asks her mom if she can sleep outside tonight. She fancies herself an adventurer, and this is the type of thing adventurers do.

And then the Wood Man sneaks into the house.

The Wood Man, a diminutive creature with a globose head that hovers just slightly above his body, has a habit, we learn, of sneaking into Hilda and her mom’s house and lying about on the floor. But it’s okay because he brings them wood. He also appears to be made of wood.

This juxtaposition of homey charm and deadpan whimsy perfectly encapsulates the world of Hildafolk. Hilda inhabits a vaguely Nordic-inspired land populated by trolls and sea spirits and giants. Later installments will illuminate this world’s hidden nooks and crannies, and flesh out its strange denizens, but in his first installment Pearson practices admirable restraint; giants and trolls and wood men are simply facts of life in Hilda’s world, neither wholly unremarkable nor wholly disconcerting.

The effect of Pearson’s unostentatious approach to storytelling imbues Hildafolk with tantalizing verisimilitude and inspired comedy. What sort of world must this be where hulking craggy-skinned trolls and sinewy sea spirits are commonplace?

And yet the books have a pleasingly irreverent streak, just as willing to poke fun as pay homage to the tropes of folklore and mythic narratives. At one point Hilda and her pet Twig, a blue fox with antlers, get lost in a “big, scary forest” after fleeing a troll. They happen upon a giant – or, rather, his foot – and exclaim that he must know where he’s going. But he’s just as hopelessly lost as Hilda and Twig. “Everything looks the same from up here,” he laments, scratching his head.

I would be doing Hildafolk a disservice, though, if I focused only on the world and not Hilda herself. While she may inhabit an intriguingly supernatural milieu, Hilda is without question the heart and soul of the series. Later installments like Hilda and the Midnight Giant (my favorite of the series), test Hilda's adventurous spirit and resourcefulness, and force her to reckon with the consequences of her actions.

Other entries including Hilda and the Bird Parade and Hilda and the Stone Forest shine a light on Hilda’s satisfyingly complex relationship with her mother. Hilda is an extremely willful child, often oblivious to the toll that her various adventures take on her only parent. Yet Hilda’s mother isn’t simply a parental foil for her headstrong daughter; she genuinely struggles to strike a balance between keeping Hilda safe and letting her grow up and experience the world. And in Hilda and the Stone Forest, they finally get to share an adventure together.

All of the Hildafolk books are stylistically and narratively distinct. Hilda and the Midnight Giant deepens the mythology of the series, introducing us to a world of ancient giants and microscopic elves that's sublime, mischievous and moving. Hilda and the Bird Parade moves the action from the countryside to the city (for reasons that are revealed at the end of Midnight Giant) and tells a story that's simultaneously about Hilda and her mother coping with sudden change and a clever allegory about human belief systems. And Hilda and the Black Hound introduces about a half-dozen seemingly separate narrative threads before skillfully braiding them together during the story's climax.

Despite their stylistic debt to the works of Tove Jansson, Hayao Miyazaki and Neil Gaiman, the Hildafolk series is no mere pastiche. With art that's humorous and wondrous in equal measure, and storytelling that entertains children and adults without talking down to either, Hildafolk is that increasingly rare commodity: a deeply personal story that has something to say to everyone.