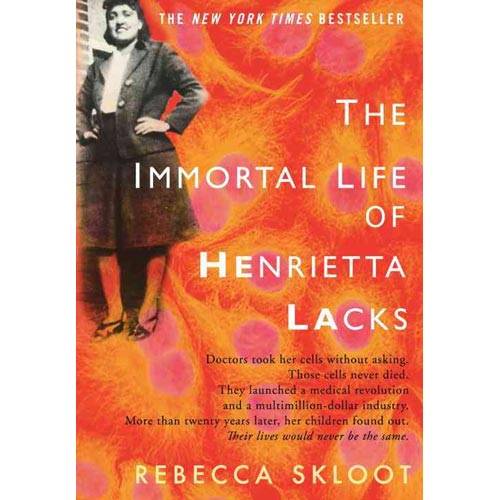 The Immortal Life of Henrietta Lacks by Rebecca Skloot is one of the most popular books of the last few years. Part biography, part scientific tale, this mulitple-award-winning non-fiction book (soon to be made into an Oprah film) follows the development of the immortal cell strain HeLa. Research performed with HeLa cells has lead to many scientific breakthroughs in vaccines, cancer research, clonning, in-vitro fertilization and gene mapping. The cells were originally taken from a cancerous tumor of Henrietta Lacks, a poor tobacco farmer in the 1950s, without her knowledge or consent. Henrietta died in 1951 but her cells lived on and her family didn't find out about the them until the 70s. These events as presented by Skloot have sparked many debates about race, ethics and medicine across society from book clubs (including many of Anythink's own book clubs) to the global scientific community.

Henrietta's cells are still at work and still have the power to incite debate. In the past few weeks, scientists posted the HeLa genome on the internet without the consent of Henrietta's family. Yes, this genetic information is very useful to scientists, but what does it reveal about Henreitta and her offspring? Should this imformation be made public? Should the Lacks have been asked to give their consent? How will this information be used and who if anyone has control over it?

Skloot responds to this new chapter in the HeLa story in an Op-Ed piece for The New York Times and also in an interview with NPR's Renee Montagne.

If you enjoy books about medical research and ethics, make sure to check out The Immortal Life of Henrietta Lacks and these other titles in the Anythink collection:

Chasing Medical Miracles: The promise and Perils of Clinical Trials by Alex O'Meara

Better for All the World: The Secret History of Forced Sterilization and America's Quest for Racial Purity by Harry Bruinius

Medical Apartheid: The Dark History of Medical Experimentation on Black Americans from Colonial Times to the Present by Harriet Washington