Elevated Reading: 'Sand' and the history of the Great Sand Dunes of Colorado 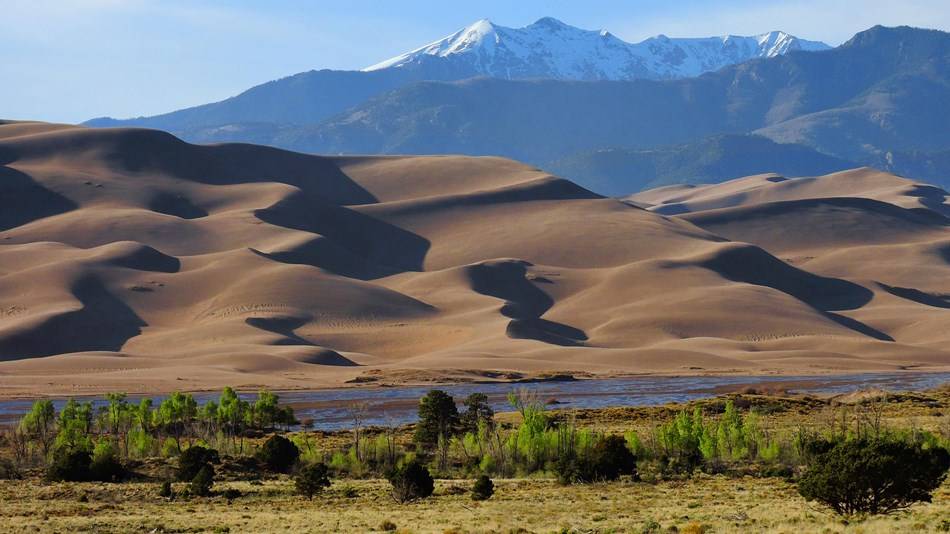 Thus begins the description for Sand by Hugh Howey, the New York Times bestselling author of Wool. Set in a grubby and brutal futuristic society, where the old world is buried and a new one has been forged atop the shifting dunes, Sand is the first of the Omnibus series. In this land of howling wind and eternal sand, four siblings find themselves scattered and searching for the lost city of Danvar – a place that once called Denver.  The characters face a constant struggle to keep the sand from winning as they to carve a life for themselves from the billions of grains burying and slowly caving in their home. While this might seem like a nightmarish and improbable future, one only a brilliant sci-fi writer could create, it's not hard to imagine given Colorado's landscape.

Great Sand Dunes National Park and Preserve is an American national park that conserves a area of large sand dunes up to 750 feet on the eastern edge of the San Luis Valley in south-central Colorado. The park was originally designated Great Sand Dunes National Monument on March 17, 1932 by President Herbert Hoover and encompasses 107,342 acres. One appeal of Great Sand Dunes National Park is that it contains the tallest sand dunes in North America. The dunes cover a total area of about 30 square miles and are estimated to contain over 1.2 cubic miles of sand. It's an attraction that's quite popular with visitors – the park entertained 442,000 guests in 2018!

So, how were the dunes created? Geologists believe that sediments from the surrounding mountains slowly filled the valley over time. After lakes within the valley receded, exposed sand was blown by the predominant southwest winds toward the Sangre de Cristos, eventually forming the dune field over an estimated tens of thousands of years.  Sand that was left behind after the lakes receded blew with the predominant southwest winds toward a low curve in the Sangre de Cristo Range. The wind funneled the wind toward three mountain passes – Mosca, Medano and Music passes — and the sand accumulated in those natural pocket. The winds blow from the valley floor toward the mountains, but during storms the winds blow back toward the valley. These opposing wind directions cause the dunes to grow vertically. The combination of opposing winds, a huge supply of sand from the valley floor, and the sand recycling action of the creeks, are all part of the reason that these are the tallest dunes in North America.

Ecosystems within the dunes include alpine tundra, subalpine forests, montane woodlands and riparian zones. Visitors to the park must cross shallow Medano Creek to reach the dunes in spring and summer months. Hiking is permitted throughout the dunes, though in the summer the sand surface can reach temperatures of up to 150 °F – so shoes are a must! Sand-boarding and sand-sledding are popular activities, both done on specially designed equipment which can be rented just outside the park entrance. If you are a Colorado resident or even just a visitor, this natural wonder is a must-visit site. It's a great place for families and a photographer’s paradise –  well-deserving of its national park title.

Stop by Anythink to grab a copy of Sand and then head on out to the dunes!

Elevated Reading is an ongoing blog series that explores books that take place in Colorado and the corresponding history of those places.