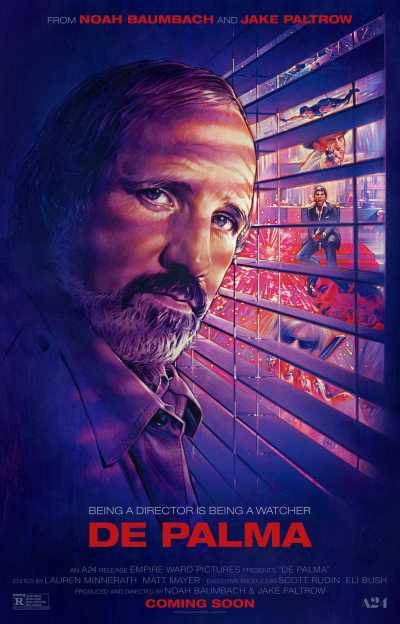 It’s difficult to think of a filmmaker with quite as polarizing a resume as Brian De Palma. Over the course of nearly half a decade, the writer/director has veered wildly back and forth from breathtaking stylistic heights to bafflingly stale lows.

In the new documentary, aptly titled De Palma, the central figure is the sole commentator on his life and work. One might expect this approach to come off as self-serving, but it’s actually a shrewd move from the film’s directors, Noah Baumbach and Jake Paltrow. De Palma proves to be his own greatest critic, with a mix of humor, integrity, and unexpected objectivity. He’s unfailingly honest on the subject of his successes and failures, blatantly detailing the circumstances leading to both. He not only offers illuminating insight into his own work, but also deftly critiques the landscape of Hollywood cinema (while dishing on everything from Sean Penn’s unpredictability, to Orson Welles’s memorization issues, to Sean Connery’s aversion to taking fake bullets). The personal details divulged are enlightening as well, if at times unsettling (on growing up watching his father, an orthopedic surgeon, at work: “You cannot imagine how much blood is flying around in an operating room”).

Carrie (1976): This adaptation of the Stephen King novel is full of iconic imagery and boasts exceptional performances from Sissy Spacek and Piper Laurie. On the subject of the book’s many incarnations, De Palma says, “...it's wonderful to see what happens when somebody takes a piece of material and makes all the mistakes that you avoided." That statement might be egotistical if it weren’t true. Stick with this supreme version.

Dressed To Kill (1980): Fun fact: De Palma considered himself a “science guy” and studied physics at Columbia, until a screening of Vertigo enthralled him enough to veer into filmmaking. Hitchcock is clearly De Palma’s greatest inspiration, insinuated into every film. Dressed to Kill, however, is the ultimate ode to the “Master of Suspense” and to De Palma himself.  It is as gorgeous as it is gloriously graphic and over-the-top.

Blow Out (1981): Partly inspired by the 1966 art film, Blow Up, this is the tale of a sound effects technician (John Travolta) who inadvertently records audio evidence of an assassination. De Palma admits that he is always affected by the way the shock ending plays out in the oddly humorous and heartbreaking final moments.

The Untouchables (1987): Featuring a very famous Union Station shoot-out scene, involving a baby carriage and many stairs, this take on Eliot Ness’s (Kevin Costner) quest to bring down Al Capone (Robert De Niro) is one of the all-time great gangster films. Costner and De Niro are aces, but originally De Palma wanted Don Johnson for Ness and De Niro was noncommittal on Capone.

Carlito’s Way (1993): A similar outing to De Palma’s Scarface (which gets all the glory), but less bloated, more subtle, and superior. The climactic Steadicam shot in Grand Central Station was originally plotted out for the World Trade Center, but the first terrorist attack took place just  two days before filming was to commence.

I like the video you have posted, filmmaking is not a game. You have to be professional <a href="http://topamericanwriters.com/">topamericanwriters</a> in this and have to full knowledge of filmmaking. But now it is good that educated persons are coming in our film industry and in this way the filing industry will also grow. As I belong to the very backward area.