Building friendships through the magic of Neil Gaiman

Submitted by Reannon Dreeszen on Mar 29 2019 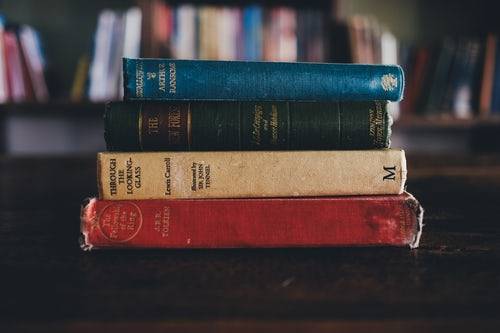 I started working at Anythink in Bennett towards the end of 2018, knowing nothing about working in a library at all. My previous life's forte had been all medical office and public safety. So jumping into a world of books was very different for me, aside from the fact that I've always been an avid reader. I kept asking myself: Would I fit in with "librarians"? Would this type of work be interesting or entertaining to me at all? Would I be able to learn enough to be able to suggest good reads or movies to customers? It was a crazy, life-changing endeavor on my part that I was both excited and nervous about at the same time.

Very quickly I realized that I do, in fact, fit in and was able to start wonderful friendships with my new co-workers. I found out that one colleague, Lisa, has the same love of all things horror as I do, so I've been able to pick her brain for things that she's seen or read that I haven't. She has read way more horror books than I have, but I am currently reading one of her recommendations, The Graveyard Book and look forward to reading it very soon!

Molly had started a conversation one day about Neil Gaiman's American Gods television series when another coworker, Kirsten, quickly spoke up about watching and loving it. Molly spoke about this Neil Gaiman with such enthusiasm that I wanted to know more about him and this show. Lisa's interest was also piqued. She decided to read the book and I decided to watch the first season of the show. Needless to say, we were both hooked. So when season two began, the four of us decided to get together on Sunday nights to watch together.

We've learned a little more about each other along the way, as well. Here's just a few examples of how each of us began a love for this incomparable dreamer, Neil Gaiman:

For myself, it was the enthusiasm that Molly has for Neil whenever she talks about him. She gets this look on her face that tells me that he's just an awesome individual and that his stories need to be read. I'm looking forward to reading some of his works as soon as we're finished watching American Gods. He's definitely on my list of authors to read going forward. Because I can only imagine how much better his books are to read than to see put in action. Good Omens, Coraline, Neverwhere, Norse Mythology – these are just a few samples of other books written by this award-winning author that are now on my radar.

Lisa: "I was first introduced to Neil Gaiman by means of Coraline by my youngest. She absolutely loves this movie and watches it religiously, citing the words as the movie plays. So after that experience, I decided to check out some more of his work. I have read The Graveyard Book, a Junior Fiction Fantasy book, and I have recently read American Gods, which I love! I love his dark writing style and his vivid imagination."

Kirsten: "Years ago (in a galaxy far far away) I went to my favorite used bookstore on Colorado Boulevard in Denver, Book Rack, and on a whim I picked up a paperback copy of Neil Gaiman's American Gods and then went down the block a little ways to my favorite Japanese rice bowl restaurant, Kokoro, to have lunch. I remember the exact bar stool I sat in as I ate my lunch and read the book. I read a good chunk of the book before finally realizing that I needed to let my bar stool go and give the waitress a chance to serve someone else. It's been years since that experience, but every time I go to that restaurant I remember that afternoon and my introduction into the wonderful world of Neil Gaiman's writing. Years later, I have that same copy (now very worn) and I've re-read the book countless times."

Molly: "Neil Gaiman’s storytelling and his love for libraries are huge reasons why I do what I do. I had Vol. 1 of The Sandman series on my shelf for years as a kid and never quite understood it enough to enjoy it. I was never a hardcore reader growing up. Then, one magical day in my early 20s, I powered through the volume and it changed everything I thought about comics and graphic novels. I’ve devoured almost everything he’s written since then (he’s written a lot), and learned what an advocate for libraries and librarians he was after reading a collection of his speeches. He’s a great human being and my favorite storyteller."

Neil Gaiman has been working on some TV shows as of late and has stated that in 2019 he'd like to "retire" from TV for a while and get back to writing. This is very exciting news for anyone that has been reading him for years, as well as those of us that are still somewhat new to his delightful works.

He offers an online writing Master Class, where he teaches his approach to imaginative storytelling. He's helping people to find their unique voice, original idea developement, and find a way to breathe some life into their own characters.