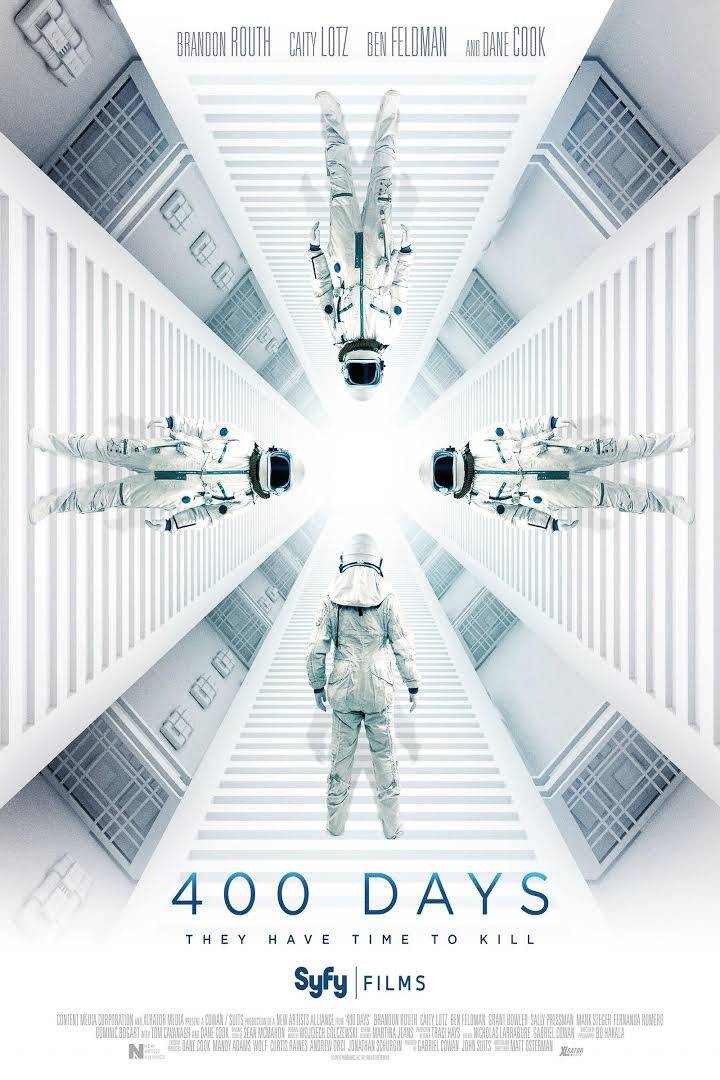 Some of the highest grossing films in history have involved space in some capacity. However, I have never been a fan of space movies. I don't know what it is about space movies, but I've never found them enticing. Recently, I didn't have many movies rented and 400 Days had been sitting on my shelf for awhile. Begrudgingly, I popped it into the DVD player. It started out relatively how I had anticipated, but very quickly I realized that perhaps I was not watching a space movie after all...or was I?

400 Days is a terrifying, high-concept, sci-fi thriller. It takes place in a smilulated underground spacecraft, in which a team of four aspiring astronauts experiment to test the affects of long term space travel. Their hope is that their experiment will be selected for an actual space mission. The team consists of a captian (Brandon Roth), a medic (Caity Lotz), an engineer (Dane Cook), and a scientist (Ben Feldman). The goal of the team's mission is to survive the simulation for 400 days, passing certain tests and curveballs thrown by the command center to test reaction time and skill level. Early on in the simulation, the team loses contact with the command center but contiue on as normal, assuming the loss of contact is all a part of the experiment. As time elapses, and without contact from the command center, the relationships on the team begin to tense and mental capacities begin to deteriorate.

As the end of the 400 Days approaches, it appears that something or someone from the outside is trying to enter the ship. The team is divided on what to do about this security breach, and eventually the decision is made to break their 400-day agreement and exit the ship. That's when the adventure truly begins. What the crew finds outside the ship is both unclear and unsettling. Earth, if where they are is Earth, looks nothing like when they entered the ship nearly 400 days ago. Could they have been moved to space? The movie ultimately begs the question: Was this a simulation at all, and if it was ,what are the moral implications of such a simulation?

I cannot to this moment decide on my own answers to these questions, but SyFy certainly made a beautiful and thought provoking film with 400 Days. I was left wondering how far is too far, and at what lengths do we push our fellow human beings in the name of science. I also feel the film offers us many answers if we look for them, or maybe it just helps us find our own truths.  Either way, I was definitely happy I chose to watch this space movie and I am hoping you will, too.