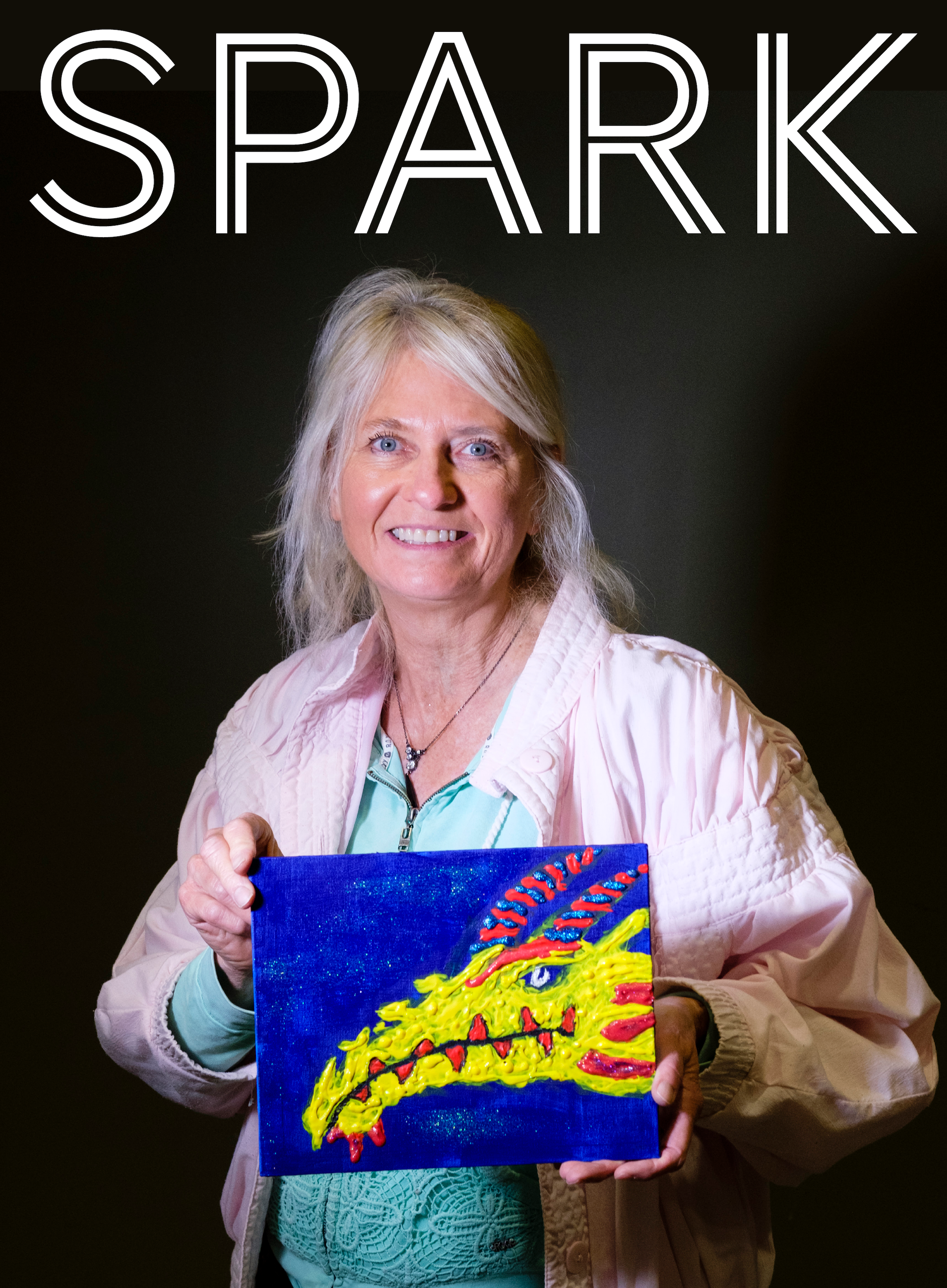 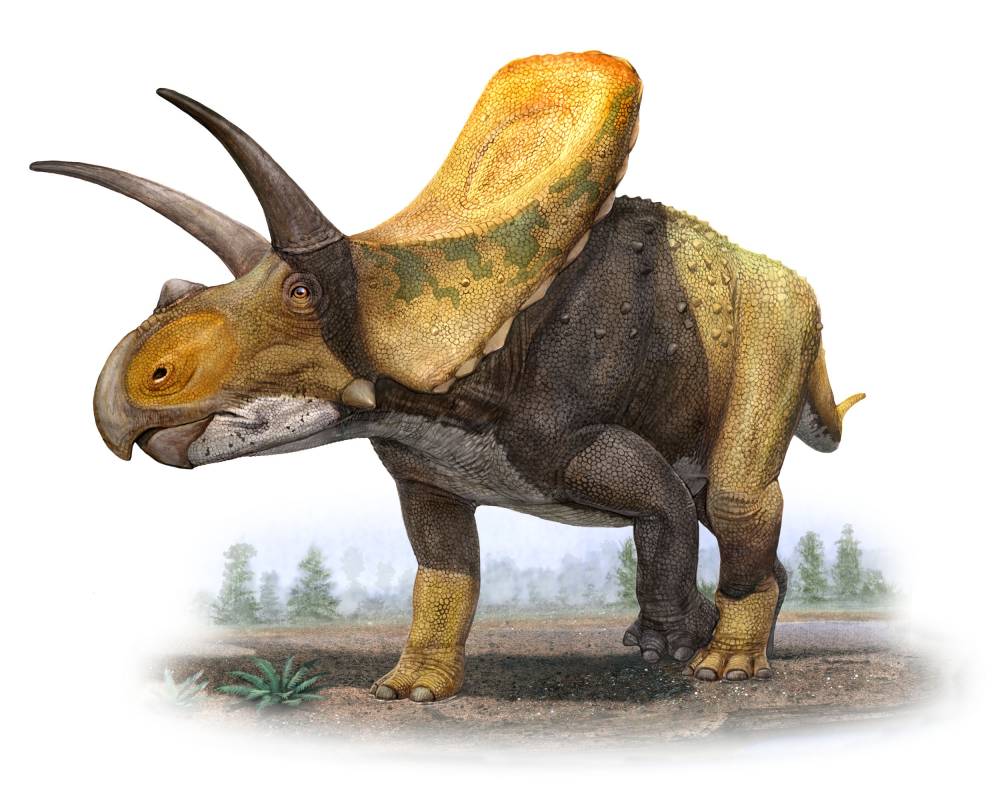 A rare dinosaur discovery in Thornton leads to an urban excavation

On Aug. 25, 2017, construction workers struck something unusual. While developing a new public safety facility in Thornton, Colo., Saunders Construction hit what they would later learn to be the shoulder blade and horn of a dinosaur. By working with the Denver Museum of Nature & Science and the City of Thornton, they were able to unearth not just a couple of dinosaur bones, but the most complete Torosaurus (think Triceratops, but longer and thinner) in the world. The dinosaur, nicknamed Tiny, is a rare find – even in a state famous for its dinosaur discoveries. We caught up with Joe Sertich, Ph.D., Curator of Dinosaurs at the Denver Museum of Nature and Science, to learn more about what it’s like to excavate a dinosaur just down the road.

Q. How was the Thornton Torosaurus initially discovered?

Joe Sertich: Construction workers from Saunders Construction were digging down through overlying dirt to the older rock levels and struck something. It turns out they had hit the shoulder blade and one of the horns of a Torosaurus. Much of the skull and part of the skeleton was just below
the surface. 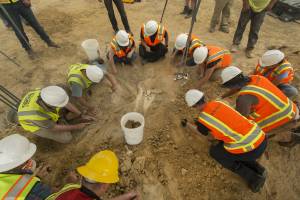 Q. What was the excavation process like for the dig team? What challenges come with physically unearthing a dinosaur?

JS: Each excavation is a little bit different. This one went quickly because the fossils were encased in relatively soft sandstone. The challenge was excavating in the middle of an active construction site on a tight schedule. Another challenge was that pieces of the skeleton were overlapping one another. It felt like every time we identified a bone and began to dig around it, we ran into another bone, making it difficult to isolate the fossils and safely remove them from the site. In the end, we were able to collect the fossil in record time thanks to help from the City of Thornton and Saunders Construction.

Q. What is significant about this discovery?

JS: This is the first Torosaurus to be found in Colorado. An estimated 95 percent of the skull and at least 20 percent of the skeleton have now been identified, making this not only the most complete Cretaceous Period fossil discovered in Colorado, but also the most complete Torosaurus ever found anywhere in the world. Most animal skeletons are scattered after death, either by scavengers or by water, so it is rare to find this many bones in one place. It is even rarer to find dinosaurs in a major metropolitan area. The Denver metro area is lucky to be one of the few places on Earth where you can find dinosaurs in the middle of a city.

Q. The Thornton Torosaurus was originally thought to be a Triceratops. How do the two dinosaurs differ?

JS: The two animals are nearly indistinguishable because both had a large horn over each eye and a smaller nose horn. Torosaurus had a longer, thinner, and more delicate frill, with two very large holes called “fenestrae.” These frill features were revealed as the skull was slowly cleaned back in the lab and compared to Triceratops specimens already in the museum collections, including one from just a mile northeast of the Torosaurus site in Brighton.

Thorton Triceratops from DMNS on Vimeo.

Q. What can we learn about our environmental history from the Torosaurus?

JS: This fossil can give us a glimpse of what Colorado was like just before dinosaurs went extinct 66 million years ago. The Rocky Mountains were just forming and the area was a low coastal plain full of rivers dumping sand and mud into lush forests and swamps. Torosaurus, along with Triceratops, duck-billed dinosaurs, armored dinosaurs, and dome-headed dinosaurs browsed on vegetation while hiding from predators like Tyrannosaurus rex.

Q: What else would you like people to know about this discovery?

JS: I really have to credit the professionals working at the site for the discovery. They knew they hit something important and started making calls right away. This is a great example of collaboration between the Denver Museum of Nature & Science, the City of Thornton, the State of Colorado and Saunders Construction, and shows that we can save important discoveries without impeding development. It’s an unusual circumstance that everyone will benefit from for years to come since we will be able to preserve this fossil on behalf of the people of Thornton and of Colorado. ■

Guests can see volunteers cleaning the bones of Tiny the Torosaurus at the fossil preparation lab in the Denver Museum of Nature & Science's Prehistoric Journey exhibition. Visit dmns.org ro call 303-370-6000 to learn more.