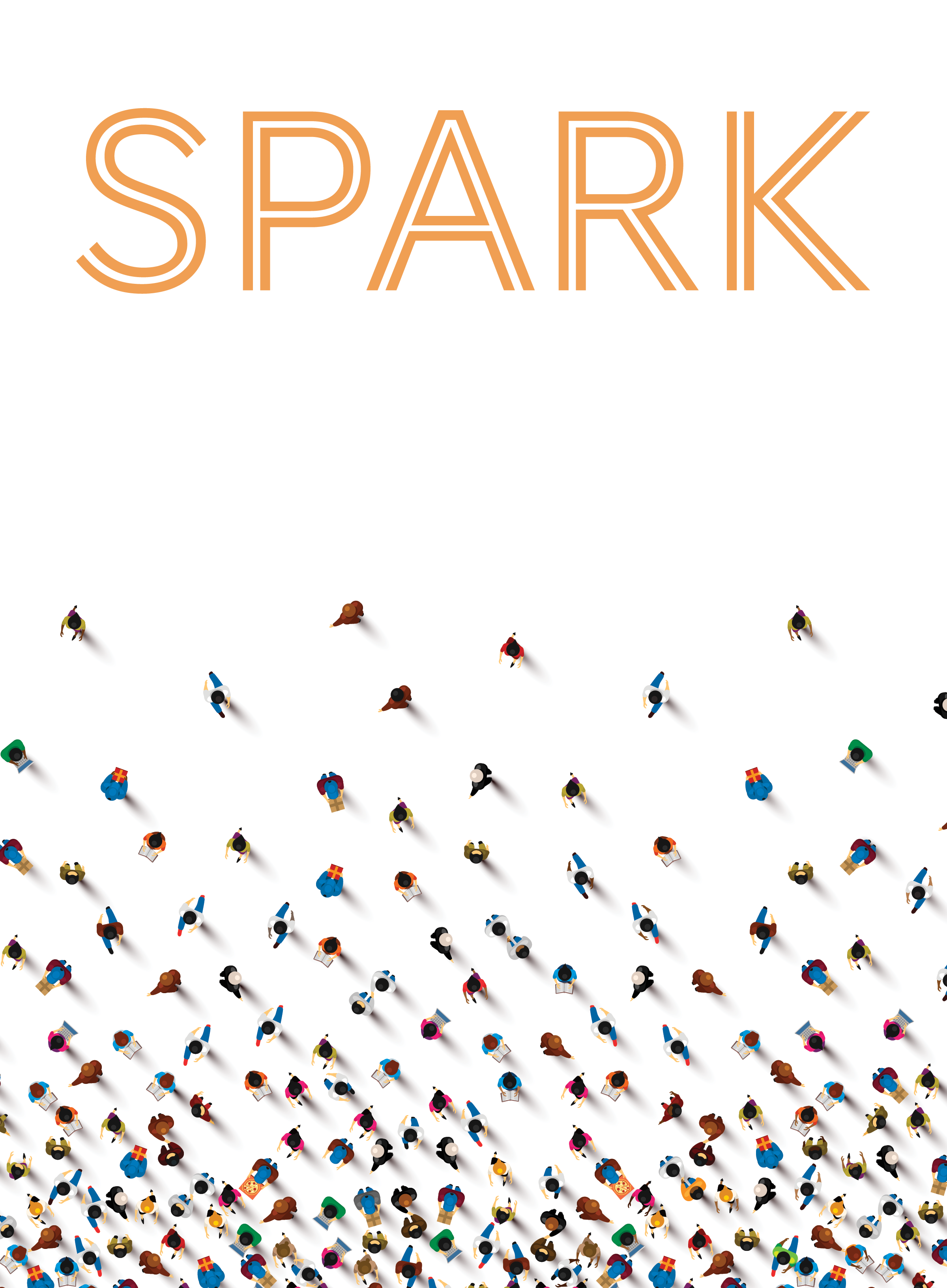 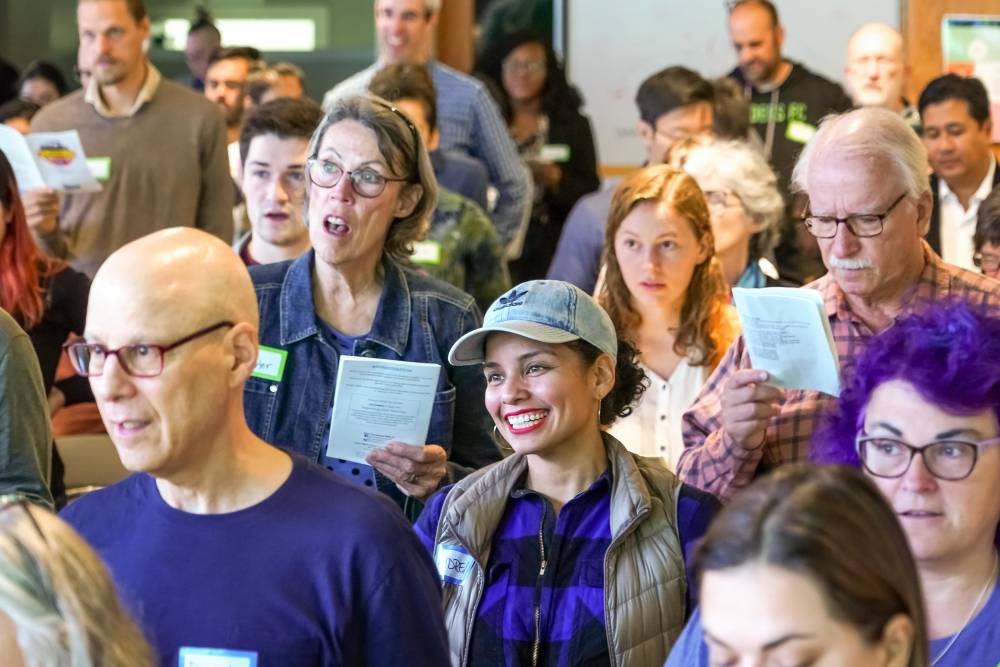 Practicing the art of citizenship with Civic Saturday

When it comes to civic life, have you ever found yourself asking “What can I do?” or even “Why does it matter?” In an increasingly polarized society, many Americans have chosen to disengage and disconnect from shared civic life altogether. Citizen University, a Seattle-based non-profit, wants to change that.

“Our team felt this tension rising and decided three years ago to create a unique gathering where folks could come together in a shared ritual where we could practice the art of being a powerful, responsible citizen,” says Citizen University programs manager Taneum Fotheringill.

Enter Civic Saturday,  a gathering designed to bring people together – not around a political, policy or religious belief, but a shared sense of civic life. With songs, readings, discussion and a sermon, the first Civic Saturday was held at Elliott Bay Book Company in Seattle. The organizers had only expected a small group to show up; instead, 200 people arrived. That’s when they knew they were onto something.

Since that very first bookstore gathering, Citizen University has hosted a number of Civic Saturdays and trained leaders from across the country on how to spread the movement to their own communities.

“We all have the power to make change in civic life and the responsibility to try,” says Fotheringill. “More than anything, Civic Saturday is a place where people can come to practice their civic faith – in democracy, in each other, and in themselves. We know there is power in creating rituals that can help support and sustain that faith, so that we can step into our daily lives with a desire to take responsibility for the health of our community and country. This gathering is part of that practice and a joyful place to renew our commitments to live like citizens.”

Today, you can find Civic Saturdays in 32 cities, with people convening at community centers, colleges, cattle ranches and libraries – including here at Anythink. Here is how  Civic Saturday is taking shape across the country. 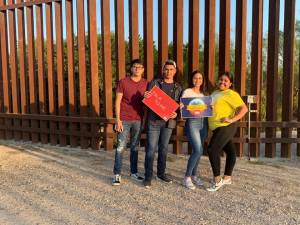 Talk Civics to Me
Hidalgo, Texas

As a college counselor, Marcos Silva returned home from Civic Saturday training with a goal of reaching young people. His city of Hidalgo, Texas, sits on the U.S./Mexico border, which presents a unique perspective on civic life. That’s why Silva set out to host his Civic Saturday with one key question in mind: What are shared civic responsibilities for young people who live in border communities? Using the tagline “Talk Civics to Me,” Silva invited area high school students to their first Civic Saturday in October 2019 at the Rio Grande River.

“For many of the participants, it was their first time having an event along the Rio Grande River and border wall,” says Silva. “It served as the backdrop and inspiration to the civic engagement conversations. Furthermore, for many, it was the first time they had conversations about the role of the non-voter in a community along two country lines.”

The event was a success, and the tagline worked: young people in Hidalgo were in fact ready and excited to talk civics. Silva is currently planning his next Civic Saturday for May 2020.

Shamichael Hallman is a senior library manager for Memphis Public Libraries who looked to local history for civic inspiration. During the 1960s, young people and college students from local HBCUs (historically black colleges and universities) helped lead the charge for civil rights, including participating in sit-ins that led to the desegregation of the same public library system that Hallman works for today. With this in mind, he invited college students to gather at Rhodes College and Christian Brothers University for two separate Civic Saturdays in the fall of 2019.

“The strength, courage and determination of those college students has provided me with a great deal of hope,” says Hallman. “My goal in hosting the gathering on college campuses was to pass on that inspiration.”

Not knowing what to expect, Hallman was pleasantly surprised when college students not only showed up, but participated in lively discussions that created lasting connections. With that encouragement, he now has even bigger plans. Beginning this year, Hallman will be hosting a Civic Saturday at all 18 Memphis library branches.

For Wendy Willis, writer and executive director of the Deliberative Democracy Consortium, successful Civic Saturdays are all about partnerships. Having hosted three Civic Saturdays in varying Oregon communities, Willis tailors each gathering to the venues where they’re hosted – a community college, a circus tent and, in September 2019, a cattle ranch.

Willis describes the C Bar C Ranch in Powell Butte, Ore., as “enchanted.” On this multi-generational family ranch, Civic Saturday attendees broke bread – specifically fry bread tacos – among haystacks and a 100-year-old barn. The participants were politically, racially and generationally diverse, bringing a wide variety of perspectives to the conversation.

“I think that we have too few opportunities for shared ritual in American public life,” says Willis. “Civic Saturday fulfills some common longings – the longing for connection, for meaning, for fellowship. Sometimes I find it hard to explain the alchemy that happens at a Civic Saturday, so I just encourage people to come.
It’s magic.” ■ 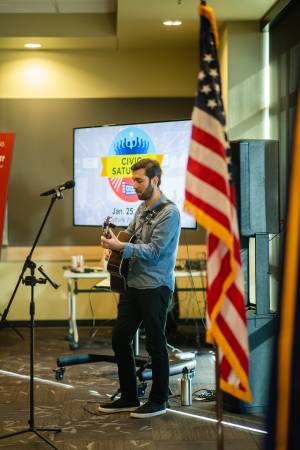 Anythink hosted its first Civic Saturday in May 2019 at Anythink Wright Farms, celebrating the theme of neighbors. This year, Civic Saturday returned on Jan. 25 with a focus on civic resolutions, asking the question: How can we individually and collaboratively contribute to the communities where we live?

If you feel inspired to organize such a gathering in your community, apply to be a Civic Saturday Fellow at citizenuniversity.org. Citizen University will also soon be piloting Civic Confirmation, a youth-focused program meant to establish civic practices and commitments early in life.